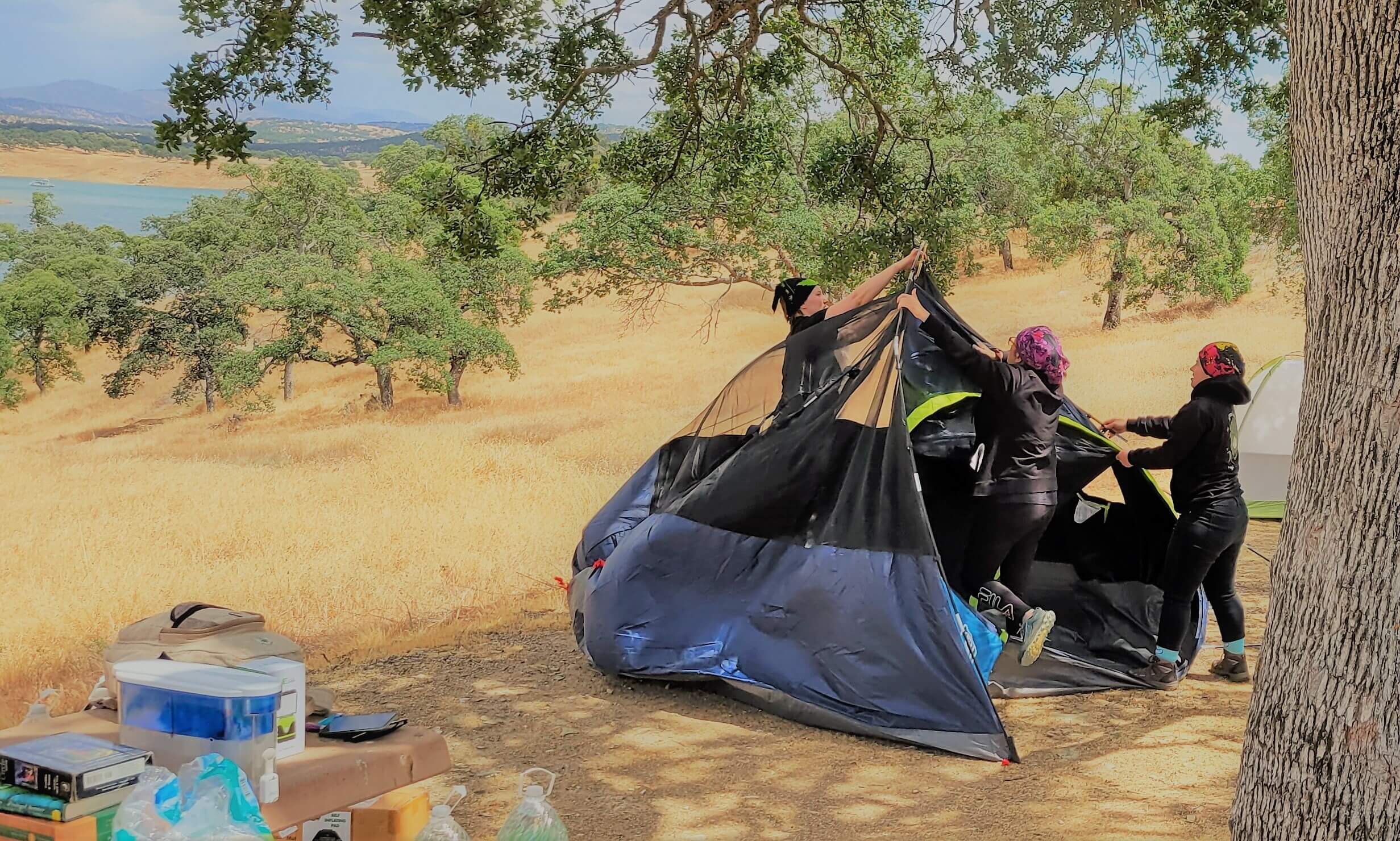 The inmates are running the campsite at Blue Oaks Campground up at Lake Don Pedro.  The insane are in charge up there. Where are the rangers? Were their budgets cut? Did Covid take them out? Why is this OK? A question we asked ourselves as we punched our pillows and tossed and turned and tried to find some relief from the torture.

Here’s what happens when you put diligent effort, day after day, year after year, in ensuring that everyone who works here, everyone who comes here, respects the quiet healing nature of our place.  With the exception of small children and the cats (sometimes), the adults all cooperate and there have been no incidences in years.  One gets used to a low amount of noise.  One gets accustomed to hearing oneself think.  That’s what happens.

I recall the days where every morning I would go out to the almond-tree-lined road that crosses in front of our homes and wait for the employees to arrive, so I could meet them and ask them to turn their music off long and far from the farm.  I told them it scares away my ancestors and I give considerable energy into getting them to come here and help me.

Telling them that making other people suffer their noise-choices is obnoxious — that didn’t work.  Telling them it scared my ancestors away — that worked.

The sun started going down at around 8 p.m. at our campsite on the mountain top overlooking lake don pedro and it was ruined by the fact that we had two sets of campers, one on each side, blaring their music so loud that the trees were offended.  I swear.  I was hiding in my tent with a pillow around my ears and I could hear the trees’ roots curling.

Sister Quinn got us all to tolerate it until 9:45 p.m. by insisting that 10 p.m. is quiet time and the rangers will be around to make sure.  By 10 p.m., she was calling the rangers.  By midnight, she had put in more than a dozen calls and texts.  By 2 a.m., everyone had given up on sleep.  It was torture.  Their music choice was, naturally, considering their manners, pro-Trump and pro-gun and anti-Black Lives Matter.  A special torture to this enclave of Sisters.  Our bodies reacted as violently as they would if we were forced to listen to cats being tortured.

Sometime between 1 a.m. and 2 a.m., there was gunfire.  It came amidst much hooting and hollering, laughter and chatter, so we just shivered in our sleeping bags and prayed they didn’t get too drunk and accidentally shoot one of us.

At 5:45, it was light enough out that I crawled out of my tent.  The sound of my zipper immediately brought the others from their tents, evidence that no one got a wink of sleep.  My first look at a face was Sister Sophia’s and she honestly looked like she aged ten years in one night.  I then looked at Sister Quinn, she looked like she had been crying.  “I guess we’re not going hiking today,” I said, and received appreciative groans all around.

We decided to pack up and get coffee on the road.  I turned to the tents on the hill opposite ours and shouted, “Good morning!”

Then I said to Sister Quinn, “Let’s play some music!”

Sister Quinn took her phone to her car and suddenly, we had Randy Rainbow blaring a Christmas song across the hills.  It gave me some satisfaction to be brushing my teeth to sound of Randy Rainbow.

When I returned from the bathrooms (very nice, very clean btw), Randy was singing ‘Born this Gay’ and so we packed, quietly, quickly, smirking to the words that we knew would make it impossible for them to continue their sleep.

By the time that first song stopped playing and the next in the shuffle list began, there was movement in the tents on the opposite hill.  Sister Quinn was packing food, I was hauling things to the cars, Sister Sophia and Sister Luna were taking down the tents.  We have nice tents.

As tired and irritated that we all were that our weekend was ruined because #blueoakscamping is the wild, wild west, there was some satisfaction in the songs that kept coming out of Sister Quinn’s car.  I put my hands to the earth to make sure the roots of the trees were relaxing.  They were.

As we finished our packing, the final song blaring from the car was to the music of Mr. Sandman, begging President Biden to bring us our vaccines.  By the time the first stanza had played, the enemy campsite was awake and trying to drown out our music with theirs.

Mr. Biden, bring my vaccine
Keep me protected from covid 19
Tell me the truth to How I might earn a
A dose of Magic Pfizer or Moderna
Biden, give me a poke
They call you sleepy but you’re pretty woke
I’m so tired of quarantine
Mr. Biden bring my vaccine . . .

“How did you get any sleep at all, Sister Kate?” asked Sister Quinn.

“I convinced myself that I was in high school, those were my high school friends making all that noise, but no, it wasn’t real sleep.”

I walked near to their campsite before I left to get a picture.  I guess I just wanted to remember how a few humans can ruin a nature trip for all.

I felt bad for my fellow sisters who did all the work and planning.  Like children, we all anticipated a fire circle and stars in the sky and the only sound the crickets and the owls.   It made us all appreciate the quiet of our little one-acre farm.  We are considering camping out in the back yard one night soon.