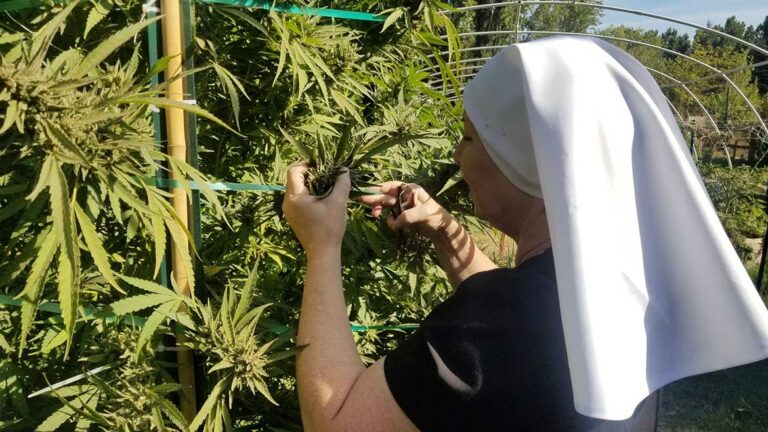 So, Kate, What Is Your Experience With Growing Cannabis?

Driving cross country from Atlanta to the central valley of California, back in the summer of 2008, my brother was already trying to convince me to get into the Cannabis business with him. We were secretly carting my kids off to California to keep them away from their felon father. We were traveling in my Dodge caravan with the three children and a golden retriever (Buddy).

We had over two hundred dollars in fireworks that were legal in Mississippi, but not California, and over an ounce of weed on us. We expected state troopers at every border, and when we’d cross, we’d do a group sigh of relief that we were clear — a sigh of relief that it was happening. Distance between my kids and their father, whose rails had clearly gone off the track. Distance between my children and his family, who were encouraging his brand of crazy. Distance behind us and a volatile two years of divorce and custody battles. The children were excited. They are adventurers, all three. But we didn’t know there were two California’s. We didn’t know we were carrying our liberal democrat souls into the Iowa of California. And it was the year of the housing market crash. We didn’t know how we were going to support the combined families. My brothers’ small electronics business wasn’t going to do it.

“C’mon, Sis,” said Joe. “You don’t want to go back to consulting anyway, you are tired of traveling all the time, you want to be with your kids. The laws on cannabis are changing.” Joe talked for a long time — as soon as the kids were asleep, and as I recall, all the way through Arizona.

Just after he finished explaining about the central valley sandy, loamy soil, I asked, “So what is the most amount of weed you’ve ever grown at one time?” His answer made me roll my eyes. One plant. One pound per year. I laughed. “You’re crazy.” I told him. “You don’t know jack shit about growing weed and you want me to found a – what do you call them? A collective?”

“I can do more!” he said, “The first thing we do is get our cannabis cards.”

He had to do a whole lot more talking, because I wasn’t even aware there was such a thing. But it all sounded like alcohol prohibition, how people got ‘prescriptions’ for their alcohol and it was procured through the doctors and pharmacists. And since my background was de-regulating businesses, telecom, cable, energy, it sounded like it could be interesting.

We had our hands full settling the kids, but over the next year, I did my research and became familiar with the steps. Because I was still in litigation for custody of my three minors, I was adamant about doing everything by the book. (Kentucky would take my kids away from me for doing this.)

My brother’s boys had very bad California central valley educations, and like many of the youth here, were doing nothing but gaming and getting stoned all day. I got them both back in school and convinced the anarchist son to study agriculture, so we would have somebody on the premise who knew something about growing. I got commitments from all of them to an ‘open electronics’ household, where no devices would be password protected and that I had the right to look into all of them. I knew that as soon as word was out that we had cannabis, my boys’ high school friends would come knocking. I made them all commit to no black market sales – ever. No ‘off the book’ sales – ever. I made my brother start declaring his cash sales at his business for the first time in thirty years, because, as I explained to him, “If I let you leak cash through your business without reporting it, and I am doing the books for both businesses, then the IRS would assume that I was also letting cash leak through the cannabis business.” He didn’t like it, but I did his books and I didn’t let a dollar slip out unreported.

We grew an eighteen pound crop our first year, a thirty pound crop our second year, and in our third year, it all fell to hell over envy and greed. As I recall, the little family delivery service we founded did around forty-five thousand the first year, seventy-five thousand the second year, and in the third year, it dropped down to first year numbers as a secret revolt was taking place in-house. The growers (my brother and his boys) weren’t getting wealthy fast enough, so they began to feed the black market, behind my back. The crops got bigger, the income got smaller. I had to bail. I loved my brother, but not enough to go to jail for him.

Most of the money earned in those years of operating ‘Caregrowers’ went to the family. We had a business that relied on doctors referring patients to us, and which netted us mostly terminal patients. We made house-calls. And we did much more than deliver Cannabis. We would run errands for those house-bound patients on our way to deliver the medicine – we would bring groceries, cigarettes – even, bring Thanksgiving dinner. For the six children in our home, ages thirteen to twenty-two, it was an exercise in service. For awhile, it worked; it was noble. We were envied our team spirit and our ability to pass the baton back and forth.

Back in those days, no one asked about the CBD to THC ratio. All anyone ever wanted to know was ‘Indica’ or ‘Sativa’? After we got robbed at gun-point, we got dogs. We named the two German Shepherds by those names, but called them ‘Indy’ and ‘Sadie’ for short. Sometime, I will tell the story of the robbery.

Even though it was quite upsetting at the time, the crumbling of the family operation was (for me) a good thing. Over those years of harvesting, curing, and making tea and tinctures, I came to love the medicine and the business. And I worked with other growers, during that time, and I came to suspect anything they’d say. I learned that many think they can grow good cannabis, but few truly can. Many boast about the size of their kola’s (which sounds an awful lot like men bragging about the size of their dicks), and I became immune to their shit-talk. My own brother and his boys did an adequate job, but as it turned out, they were amateurs, too.

When the Universe gave me a chance to strike out on my own, I knew, by that time, that if I wanted to find the guys who are the experts, I needed to find the ones who had been doing it for more than two decades. And I knew in my heart, that if the Universe brought me a real expert, he would probably have a criminal record. By the time I got around to launching the Sisters of the Valley cannabis tea and tincture business, I didn’t care. I would deal with the cultural clashes that presents, just, Lord, please bring me someone who can competently handle my crops. Bring me grown-ups who take security as seriously as the medicine, who mitigate my risk of loss.

My brother and his boys regularly did ridiculous things – cost us five hundred dollars in an attempt to save five. We lost two sets of seedlings from Attitude Seedbank, worth $500 – and that was a lot of money to us – because my brother (who likes to decide these things for himself), decided to save on electricity by removing the shell of the gaming computers and setting the plants on the floor next to them, using heat and lights from the unit. It was winter. The floors were cold. When I learned that not a single one of the seeds sprouted, I made them develop a proper cloning closet with proper lights, heat and ventilation . . . and I spent another two hundred fifty dollars on seeds, so they could try again. You get the picture. For those three years of running the collective together, the reason I got my education on ‘other growers’, is because of how my brother grew (and often — didn’t grow) his weed.

When I finally came upon an excellent grow team, I could look back and say, “I now know the difference between a good grower and a bad one.”

A good grower takes security as seriously as — with as much weight and gravitas as – all other parts of growing. A bad grower wants to show everyone his budding crop, but a good grower gets mad at you if you even suggest it. A good grower spares no expense for these plants. A bad grower tries to find short-cuts and cheats. A good grower checks them daily, sits with them, talks to them, encourages them, and treats them like the royal ladies they are. A bad grower throws his tools around and has temper tantrums in the garden, allowing contempt to flow over the ladies and makes them cringe and stunts their growth.

Good growers won’t let round-up or any Monsanto products anywhere near the Ladies. Bad growers are lazy and often choose that dark path. Good growers aren’t afraid of lab tests, bad growers are. Good growers know their strains and if, for example, a certain activist nun happens to mix two strains in a bag, the good growers can separate the weed back out by sight. In short order. With no fuss. (Ok, they fussed a little.)

When I closed Caregrowers, I turned the membership over to a group of people that wanted to take the baton (Jack’s Greenhouse) and today, that collective is one of our best clients for salves and tinctures.

I lost a grow season to trusting the shit-talk of a few more growers who didn’t know what they were doing, but by the Spring of 2014, I hit the jack-pot — the Universe sent me ‘good’ growers. It turns out that if you want a good grower, you can’t be insisting on a good citizen. And that made cultural challenges of our first harvest season unbelievably huge.

My house became the Green Acres of the cannabis business, where passionate and sometimes comical debates took place over the handling of the plants, the law, and the business. Imagine a six foot something, two-hundred pound Mexican man telling me, “I am the boss, here.” And all five foot two inches of me stretching to my tallest to say “That very well may be, but that doesn’t mean we won’t do it my way.” Imagine, then, his pause, as he wonders if I am agreeing or not. Spanish is his first language and stubbornness is mine.

Stay tuned. My next will discuss those cultural clashes as the new grow team and I got accustomed to one another.